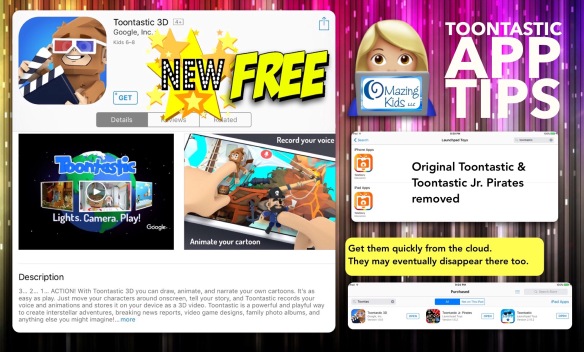 {Toontastic App News & Tips} There was lots of buzz in the app world today about the release of the new Toontastic 3D app (https://appsto.re/us/uIoqeb.i). Very exciting to see a new app but I immediately wondered if the beloved original Toontastic apps were still available. These are mainstays for language and storytelling on many speechie iPads.

I just checked the USA App Store and was sad to see that as of the time of this post both the original Toontastic and Toontastic Jr. Pirates apps had been removed as options for new downloads.

Fortunately both are still available out in the cloud at the time of this post if you had previously downloaded them.

My guess is that both of those older apps may eventually disappear all together. Which would be unfortunate since according to the App Store description it appears that the new Toontastic 3D app only works on newer devices running iOS 9.0 or higher.

Many schools and facilities like the one where I work are still using older iPads that the new app won’t work on. If this is the case for you, consider this your “heads up” to get the original apps while they are still in the cloud.

Okay…. So thoughts about the new app? I’ve explored it a bit today. Yes the 3D graphics are cool and the transitions between scenes are a bit smoother but there are far fewer choices for scene backgrounds & characters. My hope is they eventually add more but I’m definitely keeping the original versions of the Toontastic apps installed too so I don’t lose them.
.
Angela Moorad, MS, CCC-SLP
Speech-Language Pathologist
Founder of OMazing Kids, LLC – inclusive wellness & educational activities for kids of all abilities
Facebook Messaging for OMazing Kids:
http://m.me/OMazingKidsYoga
Facebook: http://www.facebook.com/OMazingKidsYoga
AppPeeps Facebook Group: https://www.facebook.com/groups/OMazingKidsAppPeeps/
Twitter: http://twitter.com/#!/amoorad
Instagram: https://www.instagram.com/omazingkids
YouTube: http://www.youtube.com/user/amoorad1
Pinterest: http://pinterest.com/OMazingKids/
Google+: https://plus.google.com/u/0/110305433538768736741
Boardmaker Share: http://www.boardmakershare.com/Community/FriendsProfile/10916/Angela-Moorad
Blog: http://omazingkidsllc.com
.
Angela Moorad is the founder of OMazing Kids, LLC and is an ASHA certified & licensed pediatric Speech-Language Pathologist and Kids Yoga Teacher with 27 years experience working in a variety of settings (early intervention, schools, teletherapy & a nonprofit pediatric rehab hospital for children with developmental disabilities). She is an app beta tester for educational & therapeutic app developers and loves sharing info about great apps, products, books & toys to use with kids of all abilities.

It will be cool to see what additional languages will become available in AAC as a result of this…. @isaac.aac
Updated Feature Matching Chart for the Top 11 iOS Symbol-Based AAC Apps. This month’s update has been uploaded onto my TPT store: https://www.teacherspayteachers.com/Product/Feature-Matching-Chart-for-the-Top-11-Robust-iOS-Symbol-Based-AAC-Apps-6867853. Ko-fi subscribers can access it on this post: https://ko-fi.com/post/Feature-Matching-Chart-update-101221-N4N16KF0K
New video on my YouTube channel: GoTalk Now: Video Line Expressions (https://youtu.be/v-YignzpGnw). This is a Communication Book that I created in the GoTalk Now app with 16 buttons with very short video clips based on “scripts” that my patients used to express emotions or thoughts. I’ve been following discussions about how traditional AAC options may not meet the needs of Gestalt Language Processors and have been thinking about how features in current AAC apps could be modified or used in creative ways. These very short video clips and Visual Scene Displays (https://youtu.be/hGPMNVLJo0c) or Video Visual Scene Displays are a few of the things that I’ve been thinking about. The video clips are saved on the Camera Roll on this iPad. I downloaded many of them from the Yarn website where you can find videos by searching a line (https://getyarn.io). If I couldn’t find exactly what I wanted on that website then I made a very short screencast recording from YouTube. Want more ideas for this fabulous app? Join the GoTalk Now AAC App - Ideas and Sharing Facebook group:
How to Video: Creating a Visual Scene page in GoTalk Now, https://youtu.be/hGPMNVLJo0c (on my YouTube channel).
I added a link in my bio to the GoTalk Now AAC App – Ideas and Sharing Facebook group:
For those asking about Attainment Company, Inc. offering trainings with CEUs about GoTalk Now, here is the reply that I received from my contact at the company:

Unauthorized use and/or duplication of this material without express and written permission from this blog’s author and owner is strictly prohibited.

Excerpts and links may be used, provided that full and clear credit is given to the blog (“OMazing Kids, LLC”) and author (“Angela Moorad”) with a direct link to the original content.

This also applies to all content shared on the OMazing Kids, LLC social media sites. Please include a “tag” to OMazing Kids when sharing content from my social media sites. I go out of my way to find, “like”, share & promote other pages & blogs and go to great lengths to give credit so I would appreciate the same kindness in return.