There was a post in the AAC for SLP Facebook group today where a member asked the following question:

“Hi all! I’m not sure there is even an answer for this question, but I’m going to go for it anyway. 😉 Is there one symbol set that is most widely used? I am only familiar with SymbolStix and PCS. To be specific, I’m not looking for people’s preferences… I am truly just interested on any data/study that demonstrate(s) which is most widely used.😊“

I hadn’t ever seen a list or data/study that had this exact info. To truly know which symbol set is most widely used for high tech AAC you’d need to have data regarding sales of SGDs, sales of AAC apps, sales of symbol sets via in-app purchases and data regarding their actual use. My guess is this is going to vary greatly across the world and influenced by both the language(s) needed by a particular AAC user and the opinions of SLPs / SLTs about certain apps or SGDs.

To truly know which symbol set is most widely used for paper-based AAC you’d need to have data regarding sales and subscriptions and then a way to determine actual use for AAC vs. all the other possible uses for those symbols.

See this separate post for info about Apps & Websites to Create Materials with Symbols: https://omazingkidsllc.com/2020/08/25/apps-websites-to-create-materials-with-symbols-on-an-ipad-iphone-list-compiled-by-angela-moorad-ms-ccc-slp-at-omazing-kids/

But it sparked my curiosity about what symbol sets are either included or available via in-app purchase in iOS AAC apps. So I looked through my vast AAC app collection and came up with the following list of symbol sets.

Based on the data that I collected, SymbolStix appears to be the most widely used (used in the most apps, available in 7 of the top 12 iOS symbol-based AAC apps – denoted by (*) in the lists below & available in traditional SGDs)

PCS symbols are commonly used (available in 6 of the top 10 iOS symbol-based AAC apps – denoted by (*) in the lists below). Especially if you factor in paper-based AAC systems like PODD and their use in traditional SGDs)

Minspeak symbols (and the closely associated symbols used in LAMP Words for Life) are only used in particular SGDs and that app but those are widely used.

8. Grid 3 on SmartBox SGDs (also available on other SGDs)

12. Proloquo + Proloquo Coach (see this free handout for info about how this new subscription-based options differs from Proloquo2Go: https://bit.ly/3uOlm86)

1. Chatable (6/8/22: this app is being updated and isn’t currently available for purchase)

5. Grid 3 on SmartBox SGDs (also available on other SGDs)

3. Grid 3 on SmartBox SGDs (also available on other SGDs)

Open Source Symbols (most available on this website: https://www.opensymbols.org):

Smarty Symbols are also widely used to make printed AAC options, in products on Teachers Pay Teachers and in a few non-AAC apps.

There are other AAC apps and SGDs that have their own unique symbols:

7. Lingraphica (apps and their SGDs)

This website has a nice catalog of all (or at least most) of the various symbol sets. Most are not widely used. I think it’s interesting to read the history behind how/why symbols were developed: https://talksense.weebly.com/symbol-what.html

It’s important to keep in mind… Symbol sets are like any other feature in AAC. There isn’t any “one size fits all” and to my knowledge there isn’t any research supporting the idea that any particular symbol set is superior to another. This is especially true when considering symbols that meet specific needs, user preferences, culturally relevant, etc…

See this quote from PrAACtical AAC: “There is no empirical evidence that one type of symbol is superior to another for all AAC clients, but there may certainly be differences for a specific individual. That’s why it is a best practice to evaluate the kind of symbol to use as part of an AAC assessment rather than picking one at random or using one based on our own convenience.”

Have a question? The best way to reach me is via Facebook messaging over on my OMazing Kids page: https://www.facebook.com/OMazingKidsAAC/ 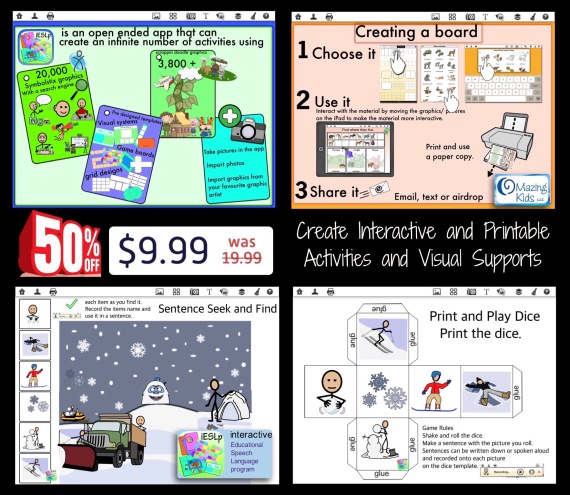 {Big App Sale} The iESLp app allows you to make interactive activities for use on the iPad or printable activities and visual supports for use off the iPad. This app is a great bargain on sale for only $9.99 considering that you could easily spend that amount on one or two items on Teachers Pay Teachers. This app is packed full of amazing features:

iESLp by Irmgard Raubenheimer
https://appsto.re/us/NiPA2.i, iPad only, usually $19.99 -> currently $9.99 (50% off) (price in USA App Store. Prices in other areas vary depending on the exchange rate)

According to the app developer’s Facebook page, the app will only be offered at the sale price for a couple of days so grab it quickly and double check prices before purchasing

The in app purchases are for extra clip art. The SymbolStix symbols are all already included in the app. See this post for details about why they included both:

See tutorials & tons of ideas for items you can create with this app on their website & Facebook page:

These are just a few of the endless possibilities. I’m in the process of trying out the app and will be posting pics of my creations in the future. Be watching my Facebook page 😃

Angela Moorad, MS, CCC-SLP
Speech-Language Pathologist
Founder of OMazing Kids, LLC – inclusive wellness & educational activities for kids of all abilities
Facebook Messaging for OMazing Kids: http://m.me/OMazingKidsYoga
Facebook: http://www.facebook.com/OMazingKidsYoga
AppPeeps Facebook Group: https://www.facebook.com/groups/OMazingKidsAppPeeps/
Twitter: http://twitter.com/#!/amoorad
YouTube: http://www.youtube.com/user/amoorad1
Pinterest: http://pinterest.com/OMazingKids/
Google+: https://plus.google.com/u/0/110305433538768736741
Boardmaker Share: http://www.boardmakershare.com/Community/FriendsProfile/10916/Angela-Moorad
Blog: http://omazingkidsllc.com
.
Angela Moorad is the founder of OMazing Kids, LLC and is an ASHA certified & licensed pediatric Speech-Language Pathologist and Kids Yoga Teacher with 27 years experience working in a variety of settings (early intervention, schools, teletherapy & a nonprofit pediatric rehab hospital for children with developmental disabilities). She is an app beta tester for educational & therapeutic app developers and loves sharing info about great apps, products, books & toys to use with kids of all abilities.
.
{please ignore any ads that may appear below. This is a free blog and I don’t have any control over ads nor do I profit from them}

Unauthorized use and/or duplication of this material without express and written permission from this blog’s author and owner is strictly prohibited.

Excerpts and links may be used, provided that full and clear credit is given to the blog (“OMazing Kids, LLC”) and author (“Angela Moorad”) with a direct link to the original content.

This also applies to all content shared on the OMazing Kids, LLC social media sites. Please include a “tag” to OMazing Kids when sharing content from my social media sites. I go out of my way to find, “like”, share & promote other pages & blogs and go to great lengths to give credit so I would appreciate the same kindness in return.