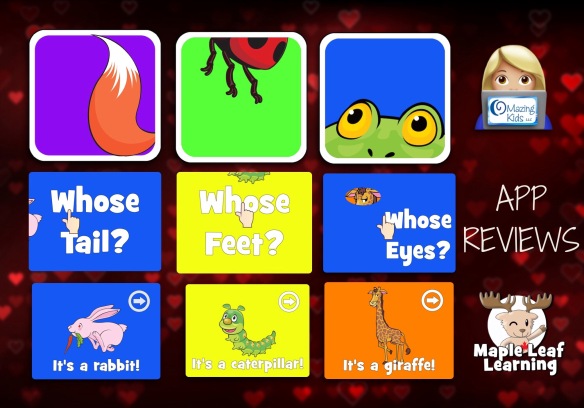 Get the best deal by getting all 3 apps in a bundle: Peekaboo Suite by Kenneth Walter King, https://appsto.re/us/hmakfb.i, $4.99

I love the catchy intro song in each app, the bright colors and cute large illustrations, that it provides a visual cue on the first animal screen, the ability to reveal the animal a little at a time, that you have to tap an arrow to go on to the next hidden animal (this allow time to talk about the parts of that animal or other things related to it), that it randomizes the order each time you open the app and has an intuitive interface. These are three apps that will be fun to use as tools to target goals on inferencing, part-to-whole & vocabulary.

My only wishes for future updates for all three apps would be to add an option to toggle off the background music after the intro song has played but still allow the voiceovers. Many of my patients become overstimulated by constant background music no matter how subtle it may seem. It would also be fun to have all 18 animals appear together on a closing screen at the end of each app. I noticed that the app developer has free printables on their website so it would be super cool if they created some free printables to go along with each of these apps!

Here are the animals included in each app:

See more about the apps: http://mapleleaflearning.com/apps/